Smoke Siignals artist DEFF MATE, formerly known as Ill Deff, is a Salt Lake City music producer hailing from Idaho, the land of potatoes. His love for the EDM community shines bright and he is always willing to lend a hand within it. You may have caught him recently on The Saltair’s NYE 2020 show, warming up the decks for the new year. Strapped with a tech deck at all times, this bass music producer is someone to look out for in 2020. Learn all about Deff Mate in this weeks episode of Before the Music.
Back To News List Next News Post

How did you get the name for your project?

I actually started out with a different alias and evolved into DEFF MATE. I wanted to take more of an original route. I started out as Ill DEFF, maybe some of the locals remember. The DEFF part really stuck with me, but after noticing there were a grip of artists with the “Ill” factor in their name, I decided to drop the Ill and add mate to really bring it’s own thing. I changed it to DEFF MATE and really wanted to keep the DEFF part with the name. DEFF actually comes from the word definition, meaning the distinctness in outline of an object, image, or in this case sound. The term mate is a form of address, meaning friend or comrade.

How did you get into EDM?

EDM for me started back when I was in high school. I was kind of dippin and dabbin in different genres when my friend showed me some old legends. People like Tiesto, Deadmau5, The Glitch Mob, Bassnectar, etc. The Glitch Mob is really who got me interested in EDM. They created a sound I had never heard before. I started to get into DJing house parties in Preston, Idaho at that time. After that I started producing.

How long after discovering EDM did you decide you wanted to start DJing?

I discovered EDM in 2009 and started DJing after going to shows for a few years. When I first started to listen to it, it was just that, listening to music. Around 2011 I started DJing and production came a year later.

At what point did you realize it was something you wanted to commit to?

My senior year in high school is when it started to take hold. I started to understand the sound. Nothing else was interesting to me at the time. I had a few other paths I could have taken. My dad is a mechanic and I could have taken that route, but it didn’t quite peak my interest. I realized I could produce music on my own and my friend Brand Visser showed me the way. He showed me his first project in FL Studio. He and my friend Jordan Johnson helped me get FL Studio. Creating music made me feel good inside and I felt like I connected with it on another level. The way I see it is, if you give a man a fish, he can eat for a day. If you teach a man how to fish, he can eat for a lifetime. That’s how I see music. I want to be able to sustain myself with it mentally, spiritually, and for a lifetime.

What made you choose to attend SLDP?

It was the next level of my production phase. I was making some alright beats, but was kind of jimmy rigging them. I understood the music theory and was feeling it. A lot of big artists tell you to feel it and if it feels good, it probably is. Once I got to SLDP they showed me how to bring my music into another level with mastering. Me and my homeboy decided we would both do it.

What are your future plans with DEFF MATE?

Keep making filthy beats and hopefully make an EP here soon. I have a lot of cool ideas and a pretty chill workflow. I feel like I could pump out an EP this year. I’d actually like to make it a resolution for this year. I might even fuck around and make a skate video part to some of my tracks. I’m kind of taking DEFF MATE into the filthy and heavy side while still having a positive outlook on things. I want to spread positivity while also bringing the dirty music vibe.

Besides the EP, what are some of your other goals for 2020?

Besides skateboarding, outside of EDM, what are some of your hobbies?

What are some of your favorite spots to eat around town?

Teppanyaki, Pretty Bird, Jinya, and Tonkatsu. I’ve been trying to go a bit leaner and be healthier so I haven’t done much fast food lately. Every once and a while when I’m tryna keep it cheap I’ll snag some fast food. I’ve really been fucking with this place called Rawtopia. It’s a pretty healthy place and their food is fire.

How would you genre classify your music?

How did you get involved with Smoke Siignals?

They picked me up after a show I played, I opened up for AFK and Squnto. ATL and his lady Megan were good friends of mine during this time. They always had my back when it came to getting me on the Smoke Siignals crew. After the show Taryn walked up to me and told me I was hella dope and that they wanted to put me on the team. This was in 2017.

What are some of your biggest accomplishments as an artist?

Playing out Bamboo Bass Festival in Costa Rica was a big one. Other than that, playing Das Energi is a big one, as well as the other V2 festivals. Working and building up my project in my hometown is an accomplishment.

What are some of the challenges you’ve had to cover come with your project?

I would say doing music as a profession is pretty challenging in itself. Other than the name change, which wasn’t even that bad, it’s been pretty chill.

You seem to play a pretty active roll in the community. What can you tell me about that?

I like to help out the scene and the family that I’m around all the time. I wanted to give back to the community that helps me as an artist. It’s really rewarding on my end because I really enjoy giving back to those who have treated me so well. It’s always good to help promote the other artists around you. I’m always about helping other people grow too. That’s what it’s all about, helping other people and not just yourself.

Yeah helping out with festivals and AR or loads ins and load outs. I’ve worked a few shows at The Saltair. Being apart of the whole thing is pretty fulfilling.

Who are some of your influences?

Liquid Stranger. He’s still got that filthy and heavy vibe, but pushes this new wavy and deeper stuff. That’s kind of the bass music I fuck with. Excison and Zomboy for their sound design too. The Glitch Mob is also pretty original and pushes boundaries. Seeing these artists push boundaries really inspires me. It’s cool to see music evolve, like Getter’s evolution as an artist. I’ve been pulling a lot of inspiration from lots of artists. 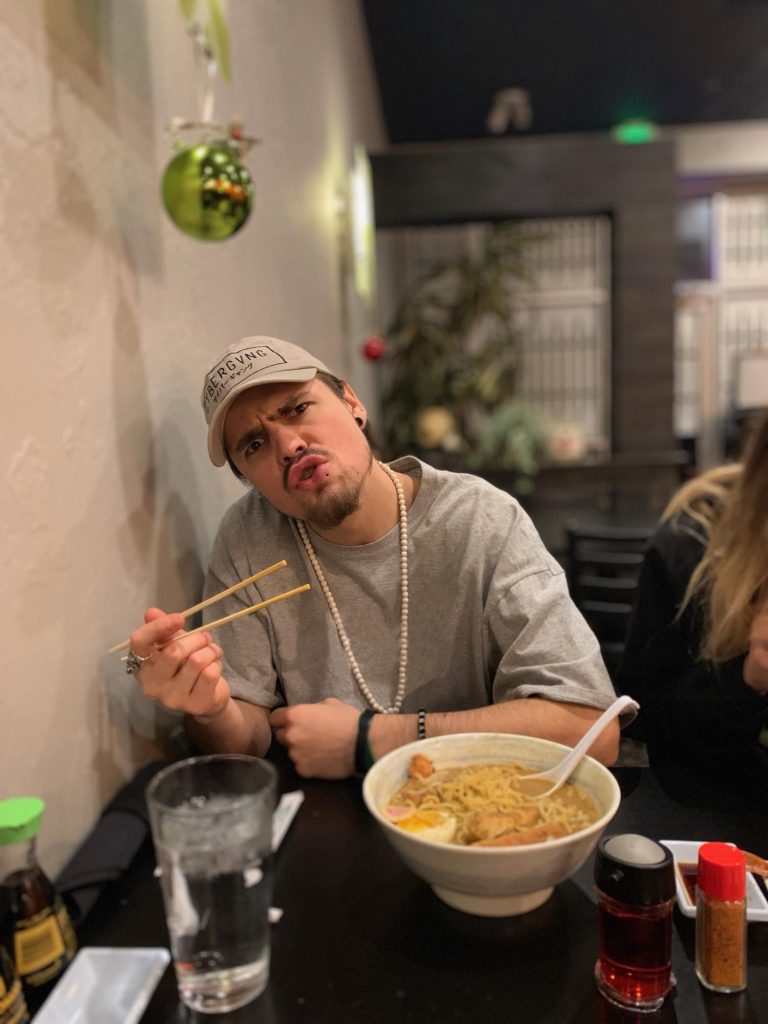 Do you draw inspiration from artists outside of EDM?

Yeah I see inspiration everywhere, especially the darker Hip-Hop stuff. I even pull it from my hobbies too like skating. I find inspiration in my family, my puppies and traveling. I get inspired from so many sources. That’s kind of what fuels me as an artist is finding the art in the nature around me.

After opening for The Funtcase and Conrank show, you received some Diamond Blade Awards. What is that all about?

I’m still super blown away about that. I’m super humbled that some people in my community were thinking about me. My manager Taryn and the main person involved Justin Ken Vence.  Had some diamond blade saws engraved with my logo. Taryn hopped on the mic and gave me the awards for being a big part of the community. It was a major surprise and I’m still speechless from it.

In a scene saturated with bass music artists, what do you plan on doing to stand out from the rest?

I’m just gonna keep doing me and put out the music I like. I feel like I have good taste in music and feel like other people will like what I like. I’ll continue to evolve my music as music evolves, but stay true to the heavy Dubstep. If I stay true to myself I’ll remain original.

Your latest single is ‘Robo Shark’ and you have a recent bootleg out for Excision’s ‘Generator.’ Do you have any releases planned for the near future?

I have a remix coming out soon and a few songs that I’m keeping lowkey and under the radar for now. I have some new patterns and compositions I plan on releasing. I have some DnB I’ll probably release too.

What’s something you’re proud of, but don’t have a reason to talk about?

Do you have the laser flip down though?

Oh dude that’s gonna be this year. 2020 the laser flip is coming. I can flip it, but I can’t quite get it under me and land on it. It’s all about the scoop and catch. I just need that catch.

If we ended this interview and you found a winning lottery ticket for 500 million, what would you do with the money?

I’d invest in ways to make the money grow upon itself. With the rest I’d buy some stuff for my dogs, family, and lady. Then I’d probably get myself some things, like a new skate deck and some CDJs. I have most of everything I need.

Is there anything else you want to let us know about you?

I love anime. I’m a pretty big fan of it. I also always rock a tech deck.