Breakbeat DJ TinkFu is a true Salt Lake OG with over 15 years of experience behind the decks. In that span of time she’s built an impressive resume with bookings all across the country. In this episode of Before The Music, TinkFu breaks down how she’s made a name for herself in this scene and discusses all things Priss Collective.
Back To News List Next News Post

How did you get the name TinkFu?

It’s an old nickname from a high school coach. I played Basketball, Softball, and other track and field sports. We were in the middle of a softball game and I got caught in a hotbox. I wasn’t the fastest on the team. The coach said I was running so fast she was going to call me Tinkerbell. I thought it was kind of dumb. At the time Shaq Fu was a big thing and I went with TinkFu.

Was that a popular nickname everyone called you by?

Kind of. People mostly called me by name last name or shortened my nickname to Tink. 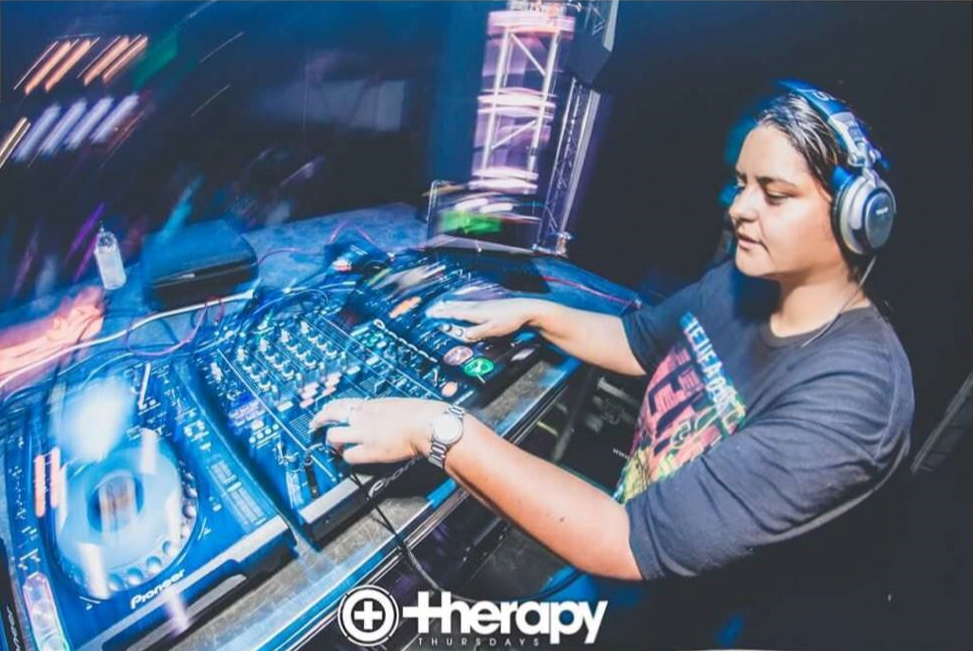 Were you DJing at this time and what year was this?

What got you into EDM?

I was a Hip-Hop kid and hated “Techno.” A friend of mine and I were downtown looking for something to do when we saw a bunch of people hanging out in a warehouse parking lot. We decided to go in and check it out. We got in and there was this rave happening. I don’t know what party it was, who threw it, or who was playing. The first DJ I heard and liked happened to be a Breakbeat DJ. It might have been DJ Sodie, Brandi Overstreet, who was a local at the time. I thought it was dope and it had a Hip-Hop feel to it. That’s how it started.

After you went to the show, how long was it until you decided you wanted to start DJing?

After the show we got a ton of flyers on our car for another party. We thought the one from that night was cool and wanted to go check out the next one. We found out a couple Breakbeat DJs were gonna be there and went. I thought “I want to be the person up there, this is cool.” I liked how the DJ took control of the vibe and was able to get everyone dancing.

What was the vibe like then compared to how it is now and how have things changed?

I would say the vibe was more, I want to say, PLUR, but like real PLUR. With today’s vibe you will still get hints of that, but it’s way more chiquey and not as inclusive.

Do you feel people at shows back then were there for the music and not because it’s a big party?

Yeah totally. People were definitely there for the music, not because it was a cool thing to do. I’m not saying that there aren’t kids today who are going for the music, but back then it seemed like there was more of it.

I spoke with Obayashi a bit about Priss Collective, can you tell me a bit more about it?

Yeah so Priss Collective is a collective of all female DJs. It used to be just local, but now we’ve spread out through the states. We put it together to support one another. Sodie and I started Priss back in about 2002. At that time it was me, her, Merryl, Mizz Nici, & Kinetik. There were only a hand full of female DJs back then so we started a crew to help support one another. At first it wasn’t anything super official, but over time it evolved and got bigger. The whole Idea behind it is to support one another. We aren’t a “You can’t sit with us” type of crew.

How do you think the acceptance of female DJs has changed since you first started Priss Co?

It’s gotten better. It’s something I still feel is a struggle, not so much here, but in other states for sure. Salt Lake does a pretty good job at including female DJs, especially V2. They always try to bring in female DJs which is super dope.

Who would you say are some of your influences?

DJ Shortee, Annalyze, and Reid Speed. The thing with Reid Speed and Shortee is they kill it with their own record labels too. I think it’s super dope they can do their thing and run a successful record label. So yeah Shortee, Annalyze, Reid Speed, the Illeven Eleven guys, Krafty Kuts, and our local SLSteez, he’s always been a big inspiration to me. He’s the dopest DJ in Utah, in my opinion. Additionally, a lot of locals inspire me, especially the ones who put in work and do things the right way. It’s pretty cool to watch them come up, I love that. It inspires me to keep pushing.

What would you say is your ultimate goal with your project?

I’ve thought about this a lot. I’m not really sure, I just love to play music. I don’t really have a goal of being the next big DJ or getting booked at EDC. I’m just stoked to get booked and play anywhere. I guess the long term goal is to stay relevant and stay authentic.

What is your music style?

You just played The Boom Festival. How was that?

It was super awesome. Motto’s parties are always some of the dopest and unique shows you can go to. If you haven’t been to one, you should go. They have that true underground vibe and people are there for the music. It’s not a super trendy thing. They did ‘The Boom Festival’ at a boy scout camp in Moab. We were arriving in Moab around 8pm and got caught in a huge rainstorm with lightning everywhere. It was super cool seeing the lightning light up the rock formations. It was some of the coolest shit I’ve ever seen. I thought, even if I didn’t end up playing, it was worth it because it was so beautiful. Anyway, we got the camp site and they had to shut everything down, but not for long. About 30 minutes later Michelle went on and the night was great. I had a great time playing as well.

I know you have a pretty strong opinion about Pay to Play. Can we talk about that?

Yeah so DJs who get booked by promoters, but have to go out and sell tickets to play is what I mean by that. You have to do all of this work and not get paid. I got hit up by this guy and he wanted me to play his show. I asked him about the details/pay. He told me I had to sell a certain amount of tickets and if the show did well, I would get paid. I said no thanks and that I wasn’t interested. It sucks because there are a lot of DJs out there who are just looking for a chance to play and agree to these things. It screws over the next person because they are expected to play for free. If they don’t the promoter can find someone else who is willing to play for free. I’m not cool with that. DJs have to stop doing this.

Van Garret Media, in short, is a company that is geared towards social media management. They specialize in live streaming services, creating digital content, logo animations, and running social media pages. They produce our Priss Co Radio shows. If you haven’t seen those you can go to Youtube and search Priss Co Radio, they will pop right up. They do all of that production and basically put the show together for us on Youtube, Facebook Live, and Twitch. Van Garret Media is a local company and are super great, so if anyone is looking for those types of services, hit them up.

What do you mean when you say a lot of DJs don’t mix anymore?

I’ve noticed a lot of DJs don’t mix a lot of their tracks and radio slam things in Some even play a pre recorded mix and just pretend. Last weekend there was a show and one of the sound guys said four of the DJs were playing pre recorded mixes. It blows my mind. I’m used to mixing for 30 seconds or a full minute plus.

Back on The Boom Festival, was that your most recent show?

No, Nicole and I got booked for the ‘Illuminate Festival’ at The Gateway last weekend. They wanted more chill and loungish DJs which worked out pretty well. I’ve been getting into a lot of Downtempo chill stuff and Nicole has a ton of Liquid DnB that went over pretty well. We played Friday and Saturday night. Shout out to the Utah Arts Alliance for having us!

What upcoming shows do you have in the works?

What’s something you are proud of that you never have a reason to talk about?

I’ll give you two answers, one personal and one on the DJ side. On the personal side, I’m proud of my current status. I own a home, own a car, and just got married. I’m living the American dream. When I was younger I didn’t think I would be where I’m at today. I’ve been able to do this because of my career. I work as a network telecom engineer for a medical staffing agency. It has enabled me to do these things, I will have worked there for 12 years in May. It’s nice to have a career and be happy, I never get to tell people that. On the music side, I’ve never been one to brag or shoutout my resume. I’m proud of the fact I’ve played in LA, Portland, Miami, Orlando, Vegas, Denver, Philadelphia, NYC, and Idaho. I’ve played out of state a ton of times which is kind of what you want as a DJ. I guess I’ve never really sat back and looked at how cool all of this is until now.

Do you ever feel it challenging to be booked because you play Breaks?

Yeah, Breakbeats are one of those genres that doesn’t get a ton of love. It’s kind of funny because you have Dubstep and Trap, which are broken beat genres that get played at every club and festival. I would be so stoked to see this change.

If we finished this interview and you found a winning lottery ticket for 500 million, what would you do with the money?

Man that’s a loaded question. Obviously the first thing to come to mind is to take care of my family. I’d pay of all my stuff and do a lot of traveling. I think I would keep my job too. I don’t think I could sit around and do nothing. A good portion would be donated to charity too. I’d also hook you up. Since I’m here, you would be part of the reason I found the ticket, so I’d get you taken care of. Thinking about this is a fun thought, but it also gives me anxiety. I don’t think it would change me as a person, but it would change my surroundings. Everyone will come at me because I have money and there will probably be a lot of fake friendships.

Is there anything you want to cover that we haven’t talked about?

No, I think we got it all. Thank you for having me, this was super cool. I’ve had a great time doing this! 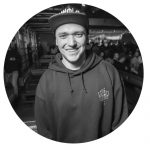